In the summer of 2020, my girlfriend and I had the pleasure of sailing the beautiful S&S yawl, MARETEA, from Oslofjord to Bergen. The route takes you through many charming communities and spectacular scenery. And as is often the case in Norway, there is ample opportunity to sail within the protection of barrier islands and skerries, providing a tenable route in a variety of weather conditions. This trip does however contain a couple stretches of exposed coast and care should be taken to undertake them in favorable conditions.

Tonsberg is Norway’s oldest town and a favorite destination among Norwegians. The waterfront hosts numerous bars and restaurants and the town has an old-world charm that is more characteristic of continental Europe than Norway.

For Norwegian standards, Tonsberg is a large town which makes finding supplies convenient. There are several building supply stores and a Biltema (Biltema is famous in Norway as a depot that sells a huge variety of cheap tools, recreational gear, car parts, and even chandlery items.) For provisions, you will find the same 3 or 4 grocery chains all over Norway. Meny and Spar have the most variety. In general, chandleries in Norway are small. Maritim BatUtstyr is the biggest chandlery chain in Norway and has a Tonsberg location.

Since MARETEA had been hauled out for a few years, there was a fair amount of work to be done to recommission her and prepare for the voyage. Tonsberg proved to be a very convenient starting point. The boat was stored in a lot about 5km from a harbor, so we needed to hire a truck to launch.

Before long we were rigged, ready, and sailing in lovely weather. The coast of Norway from the Swedish border to the southern tip at Lindesnes is known for the best weather in the country, with a relatively large share of sunny days compared to regions on the west coast. This was certainly our experience on the trip

Stavern is a very cute village that is quite popular with people from Oslo as it is only about 2hrs drive away. Its an idyllic summer scene with cozy cafes and ice cream parlors aplenty. A good marina with adequate berths and food and drink on the wharf.

A short cruise down the coast from Stavern brings you to Jomfruland, or virgin land in Norwegian. It’s a geologically interesting island as it is a moraine formed during the glacial period, meaning it is low and sandy. There is a small marina that fills up easily in the summer. Just drop the hook nearby if you can’t find a spot. The island is lovely and I highly recommend renting a bike. They are available right by the marina and the riding is lovely on flat, dirt roads. Picturesque horse farms are scattered around the island. The northern tip of the island has beautiful open land and cows grazing by the beach.

Kragero is probably the most well-known “summer resort town” in the region. The area is dotted with some the fanciest seaside cabins in the country and is very popular in the summer with wealthy people from the Oslo area. There is an actual resort here as well called Kragero Resort. It is one of the premier resorts in Norway. In town you will find a lively boating scene and some great restaurants.

The next stop was probably my favorite of the whole trip. The village of Lyngor on the island of Lyngoya oozes charm.

The approach is made between islands, and the fairway is lined with immaculately maintained homes.

Dockage is limited in the little village, but we managed to secure a spot in front of the Lyngor sail loft. The loft is well known in Norway for producing traditional sails and also operates a seafood restaurant in the adjoining building. Superb food and ambiance. Otherwise, stroll around the meandering foot paths (no cars) on the island, a postcard picture around every corner….

Arendal is a relatively large town along the southeast coast which is handsomely situated on the junction of 2 sounds. There is a large, well-appointed guest harbor with plenty of shops and supplies nearby. I had a crew change here as there are good transportation options, including a train station. Frida had to go back to work and my friends Anna and Kristian came aboard with their sweet dog Moppy.

The weather made a slight turn for the worse in Arendal and the 4 of us departed Arendal under power into moderate headwinds, overcast skies, and light rain. We did our best to meander through the maze of islands and skerries to keep the boat in flat water and by day’s end we were reaching along the last stretch of water into Kristiansand. All-in-all it was a pretty comfortable day on the water.

The capital of the south is most known for favorable weather, an unusual Norwegian accent, and religious conservatism. I can’t say the conservatism was readily apparent and we enjoyed a half-day in town strolling around and eating a good meal at the waterside Sjohuset restaurant. We fueled at Hartmanns Marina and carried on down the coast.

It was a short trip to Ny Hellesund, a narrow fairway between the islands of Helgoya, Kapelloya, and Monsoya to the southwest of Kristiansand. It’s a postcard perfect fishing camp, definitely worth a visit, but the weather wasn’t great so we carried on to the village of Hollen to wait for a change in the breeze

Lindesnes is one of the infamous capes of Norway and the southern most point in the country. Care should be taken rounding this stretch of coast as there are strong currents and weather conditions can change quickly. We departed Hollen with overcast skies and a moderate easterly breeze. We had an entertaining day of sailing through the southern archipelago. Much of the time we were treading the line between gybe and running aground and there was an especially hair-raising moment when we added a narrow bridge channel and another sailing vessel into the equation. Overall, this part of the trip was memorable for the myriad channels and remote feeling. There’s not much development out there aside from the odd cabin.

Finally, we were in sight of Lindesnes and decided to go for it in a 20kt easterly. It was a great rounding and it wasn’t long before we were reaching along beautifully in flat water toward the town of Farsund.

We sat in Farsund for a day waiting out bad weather. It rained heavily. The town does not have a lot to offer but we took refuge in a decent bar.

The next day we set off for Egersund, a day’s run for us down an exposed stretch of coast. There were some sloppy seas left over from the foul weather the day before. The waves ricocheted off a rocky and desolate coast and the look of the barren cliffs set in a grey sky gave one a sense of foreboding. We made Egersund’s approach after dark. The area’s fishing and oil industry illuminated the shoreline.

The next morning, we enjoyed Egersund’s casual air and warm weather. It’s not a spectacular town and the smell of fish meal is pervasive, but we were left with fond memories of the place. The fishing industry here is impressive with some of the most seaworthy looking vessels I’ve seen.

We departed before first light from Egersund navigating through the port’s well-lit western channel. A good day of sailing along more exposed coast brought us toward Stavanger, Norway’s fourth largest city. The landscape really changes on this leg. The coast suddenly transforms from rocks and cliffs to flat and fertile looking with farms that spread out down to sandy beaches.

Stavanger is quaint and entertaining, but we opted to skip it and head straight for Skudeneshavn on the southern end of Karmoy. It’s a tight little harbor with an entrance channel that winds right through the village’s old waterfront homes. It was sleepy when we were there, but could see it can be busy during warm summer weekends.

Again, we spent a day weather-bound, so we hopped on a bus up to the Viking village of Avaldsnes. A powerful Viking tribe was once situated here on this strategic straight that connects western Norway with the south and there has been extensive excavation and archaeological work done. There are some interesting reconstructions such as a Viking long house and some nice trails to explore.

The following day was a short run north up the straight past the Viking village to Haugesund. The straight gets narrow near Haugesund and the current rips with plenty of traffic which kept things entertaining. That afternoon we were tied up on the town quay along Haugesund’s waterfront. Haugesund is a medium-sized town in Norway and is a little rough around the edges with some interesting looking street people and some run-down buildings. But there is charm here too and I admired it’s working, no-nonsense waterfront.

The next day we entered the majestic and awe-inspiring coast that Norway is famous for. Just north of Haugesund, we sailed into the mouth of Hardanger fjord, one of the largest fjords in Norway. High mountains, glaciers, and sheer cliffs dropping into the sea could be seen in the distance. It’s the landscape that many come to Norway to experience and the scenery is certainly impressive. True fjords of this type make for very straightforward cruising as the water is deep with few obstructions. The water depth is often as deep as the surrounding mountains are high making anchoring problematic at times, but one is never too far from a village with a quay to tie up to. The deep fjords are often blessed with very gentle water unless the wind is blowing from very specific directions, either up or down the fjord, as the high mountains do a good job of creating wind shadows. You will often find that these types of fjords are better suited to motor vessels than sailing vessels.

Our last night of the trip was spent in a quiet spot on the archipelago that is Austevoll. There’s not much here and is mostly known for it’s fishing fleet that has made the islanders quite wealthy. The final day of the trip was made in warm sunshine and we cruised our way into increasingly busy waters near Bergen. The impressive Askoy suspension bridge that connects Bergen with the island of Askoy welcomed us to Norway’s medieval capital and cultural heart of the country.

Bergen is Norway’s second city. It’s famous for its crooked, old waterfront and it’s importance as a Hanseatic economic center is still evident. The old wooden houses, narrow cobblestoned alleyways, and setting amongst 7 rugged hills gives the city a fairytale feeling. Bergen is famous for rainfall, with more precipitation days than almost any other city in Europe, but the weather can change quickly, and what seems like a dreary drizzly day can soon become sunny and spectacular. Bergen is a great place to start or end cruises along Norway’s dramatic western coast with an international airport and close cruising range to some of Norway’s most iconic fjords.

I currently live in Bergen and operate a harbor tour cruise using a replica Viking ship and run a yacht services business. Please get in touch if you’d like a Viking experience or you need a hand during your time cruising in Norway. 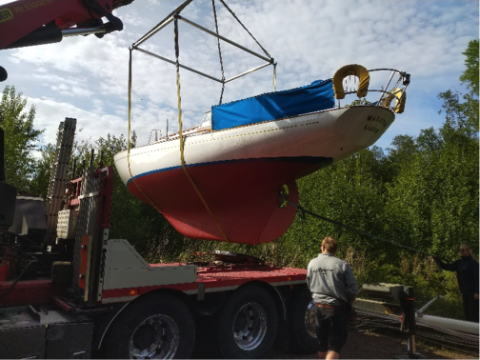 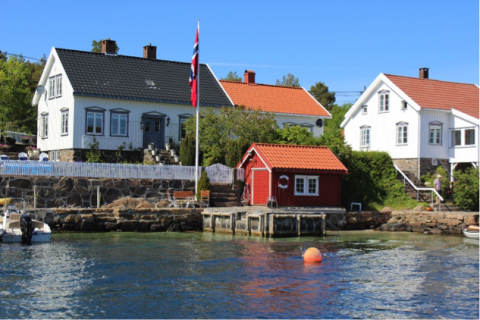 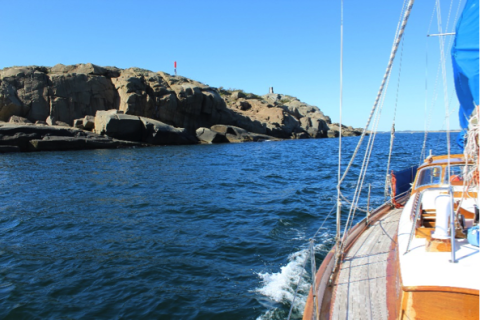 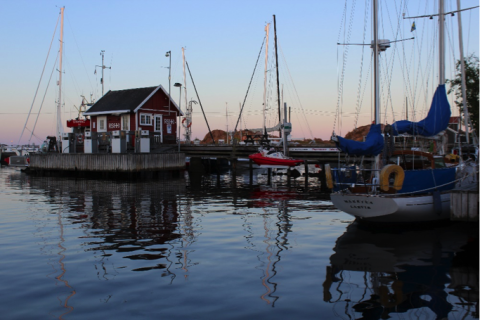